In my capacity as Chair of the NZPBC, I had the pleasure of attending the final event of the Cook Island delegations visit to New Zealand held at the MFAT/NZTE offices in Auckland City.

This was a great event, with a fantastic cultural show to open the evening with speeches from both the Cook Islands Prime Minister, Mark Brown and Minister Aupito William Sio, Associate Minister of Foreign Affairs and Minister for Pacific Peoples.

Prime Minister Mark Brown spoke of the diversification of business and the economic move to focus outside of the tourism industry that has been bought to its knees through COVID, and he had a very balanced approach to the exploration of their waters for Natural Resource gathering with a forward plan on how this can help their people. The discussions around their ability to vaccinate quickly, and the very high traditional rates of vaccine uptake bode well for the Cooks being well-positioned to thrive in the near future.

There was a broad discussion around the confidence of a two-way quarantine travel bubble between New Zealand and the Cook Islands, however, this confidence was significantly higher from the Cook Island delegation than the New Zealand government. The Cooks are ready to be open for business by 1st May, and as I write this report belatedly on this date, I am in disbelief that we still have not had an announcement of any sort.

Whilst I can understand the economic importance of the Australian travel bubble, I can’t help but feel that our Pacific brothers and sisters are being treated more like children than equals at the table. The Australian bubble, from all accounts, has been great for reuniting family and friends with their loved ones, but the increase in tourism spend has appeared to be very low to non-existent. My conclusion is that both sides of the Tasman view travel for anything other than reunions with loved ones as too risky.

The Cooks is a prime example of a country that has handled COVID as a world best, they had geography in their favour but made clever decisions and New Zealand is in a position to stop their economic suffering. With a one way bubble and no jobs available in the Cooks we are giving them further suffering by enticing their working-age people to come to New Zealand and join in the economic boom, it will be difficult for many to make the decision to return home when the borders re-open.

With an announcement coming later today from Prime Minister Jacinda Ardern, I hope for the sake of the Cook Islands that it contains positive news and that the rest of the Pacific is opened when each country feels it is in their best interest to do so. 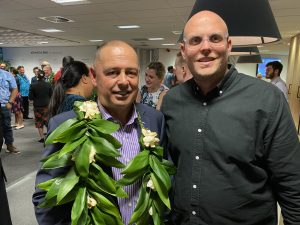