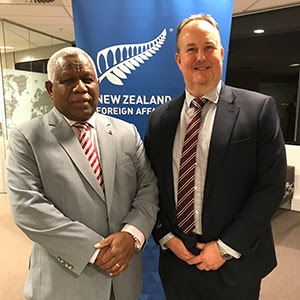 On Wednesday 6 June the New Zealand Pacific Business Council hosted an event for members to meet the Prime Minister of the Solomon Islands and hear of his plans for future prosperity; this event was held at the offices of the Ministry of Foreign Affairs & Trade in Auckland.

Following the formal welcome for the Prime Minister, Mr Devin Brown, Chair of the NZPBC, opened the function by discussing his fondness for the Solomon Islands garnered by building and upgrading electricity network infrastructure in Honiara, Auki, Gizo, Munda, Noro and Tulagi over several years. In addition, Mr Brown acknowledged the warm welcome they received from local business, the Solomon Islands Chamber of Commerce and the Government of the Solomon Islands when the NZPBC ran their business mission in September 2017 to the Islands.

Prime Minister, Rick Houenipwela addressed 35 NZPBC members from a variety of sectors, which included consultants, renewable energy providers, legal firms and freight forwarders, either currently conducting business or looking at the possible opportunities in the Solomon Islands. Some of the key points made by the Prime Minister include: