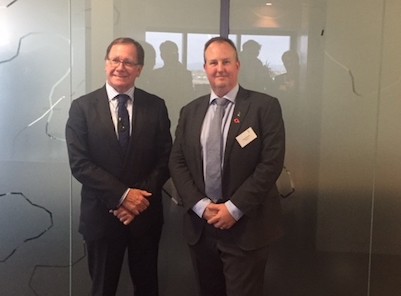 The future of the New Zealand Pacific Business Council (NZPBC) looks bright as it continues to evolve, grow and add value for its members.

On November 9, the NZPBC staged its annual general meeting in Auckland, followed by a networking event focused on Pacific Islands Projects.

Former Foreign Minister for NZ Murray McCully took the stage at the reception hosted at Chapman Tripp law firm, treating members to observations and insight about the Pacific region, and its importance to NZ during the eight years he worked in the role.

Other speakers included Brian Clayton of Chapman Tripp, who spoke about a solar project in Tonga and Tina River Hydro Project in Solomon Islands, while Peter Rowe presented about the mechanisms NZECO can offer to mitigate country and non-payment risks.

Devin Brown, who has held the NZPBC Chair’s role for one year, led the AGM prior to the networking function, and says the Council is in good shape, with numbers remaining stable, and the organisation rolling out great events throughout 2017.

“Recently the executive committee had a strategic conversation about the direction and shape of the organisation… essentially looking at increasing members and how NZPBC can add benefit to its members,” Devin says.

“It has reaffirmed the most important benefit we can provide to our members is information about opportunities in the region for New Zealand firms.”

Focus areas in the future include disseminating information to members more effectively and also the Council’s commitment to delivering quality functions, and facilitating a yearly business mission.

This year, NZPBC hosted its second consecutive business mission after a hiatus.

“The business mission was very successful and achieved its objectives to provide insight into the political situation and the stability of the Solomon Islands – for both business and government; exposure to locally based companies that can provide services and advice on how to business in the Solomon Islands; a detailed view of the opportunity pipeline for those businesses particularly interested in the infrastructure sector; and a chance for New Zealand and Solomon Island businesses to interact and explore opportunities together,” Devin adds.

A highlight for the Council during 2017 was the recent Renewable Energy Showcase, hosted at Transit in Auckland.

The working model of a renewable energy network featured Solar Array and a Battery Energy Storage System, which combined to provide power at the host’s premises.

Another important event for NZPBC in 2017 was the Pacific Chairs Meeting in Wellington in August.

Hosted by NZTE and the Ministry of Foreign Affairs and Trade (MFAT), it was the first time the meeting was held in Wellington.

“It enabled Pacific chairs to discuss working together and networking with various people within the organisations, and the well-attended after-function was an opportunity to network with businesses not based in Auckland,” the Chair says.

Much of the AGM focused on looking forward to the future, where NZPBC will continue striving for increased numbers, and to provide information and opportunities to network with businesses of the Pacific and those interested investing it the region.

However, its past was celebrated and acknowledged with the farewell of several long-serving members in previous Chair Graeme Roberts of BECA; Jane Seccombe of the Dame Jane Foundation, who is leaving to concentrate on raising the level of midwifery in the Pacific to decrease mother/child mortality; MFAT’s Nigel Ewels, who is moving to Kiribati to take up the role of Deputy High Commissioner; and MFAT’s Peter Lund, who will switch his focus to North East Asia.